Free Metro Ride for Women: Step for Women Empowerment or a Political Gimmick 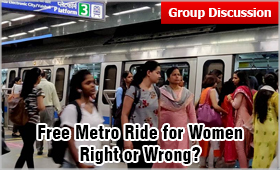 Recent announcement in June 2019 by the Delhi Chief Minister, Mr. Arvind Kejriwal, to make metro and bus rides free for women in Delhi, has sparked off a row on the key implications of the proposal as regards to its viability, need, financial impact and above all impact on women’s mobility, which is also linked to education, employment and access to public spaces.

The back ground to arrive at such a decision is not without a strong base and the target is the low income group women who wish to get proper education leading to employment but are kept immobile due to various reasons and compulsions.

The Back Ground
With the orthodox mindset of the families, especially lower strata, migrants from other states, poor women coming from rural areas in search of employment, low income group brides joining the new families in Delhi have to face the brunt of unemployment, lack of mobility due to financial restrictions among others. Delhi, therefore, instead of becoming an example of well civilized advanced city offering equal status and empowering the women, has become a nightmare for the safety and security of the women.

In a country like India, public transport in metropolitan city like Delhi is the backbone for mobility. A large chunk of population makes use of buses, cabs, carpools and metro to reach from one place to another. While a large amount of people travels though Metro, there is still some numbers who do not have access to same. To some female travelers, public transport like cabs, bus service, and even metro have not been safe, while many others are unable to afford its rising fares.

In this regard, on demand by Government of Delhi, the Delhi Metro Rail Corporation (DMRC) has prepared a plan for Women which will grant them free metro rides, if successfully implemented. DMRC has also shared that implementing the free travel for women scheme would result in an annual loss of around Rs.1560 crore, out of which Rs. 11 crore will be incurred in its feeder buses. At present DMRC is operating a fleet of 174 feeder buses and plans to add 905 buses soon.

The DMRC Free Metro Ride for Women: Scheme
The details of the plan are given below:

The Road Ahead & Efforts Made
Some have criticized the offer of free public transport for women as discriminatory against (working class) men, Kejriwal has drawn attention to the problem of women’s safety.