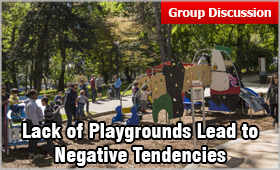 A healthy body is the house of a healthy mind. At the growing age, it comes with lot of physical activities, games and sports played outside in the open spaces and play grounds, which are perishing fast. These outer spaces significantly impact our mental and physical well-being as the foundation of a person’s growth and betterment lies in the very environment he/she resides in.

Environmental structures such as parks and playgrounds act as a platform for children to engage in physical activities. A report for District Information System for Education (DISE) emphasizes that even 40% of schools in India lacks playgrounds. This downfall has significantly affected children’s various aspects of growth and has developed several harmful dispositions into them.

In today’s time, a great number of residential spaces have turned into concise and congested flats, leaving minimum open spaces affecting adversely the creativity and positive throught process of upcoming generation that remains more engaged in digital instruments, mobiles, TVs, Computers, Internet browsing. All this impacts their natural growth and lead to negative tendencies. Many youngsters have lost their lives playing game on mobile without the knowledge of their parents.

How can a school without play ground help its students to grown up as strong citizens physically & mentally. While the schools in foreign countries which have smaller geographical area, are not allowed to operate without a well designed play ground of required size, in India there are many schools operating and imparting education without a play ground or a with a very small play ground which is not compatible to their student strength.

Lack in the open spaces for physical activities and gradually vanishing play grounds has become an alarming situation in India. Key reasons for this loss can be attributed to population explosion, urbanization and commercialization.

In many developing countries like India, the expansion of urban population has resulted into a rapid rise in the demand for housing, land for industry and commerce, public buildings and infrastructure, which has minimized the existence of playgrounds.

The unplanned growth of metropolitan cities of India has greatly contributed to the shortage of playgrounds spaces. The sprawling urbanization and the rate of population in cities like Bangalore, Mumbai, Delhi NCR have eradicated areas for parks and playgrounds. According to the World Bank report (1991), since 1950, the population in metropolitan cities has increased from 300 million to 1.3 billion and by the year 2030, these cities are expected to grow by 160 percent.

The National Health Portal of India has mentioned several factors that are turning children as non-indulgent towards physical activities. Some of the enlisted factors are sedentary lifestyle, increased use of technology, absence of parks or sidewalks, spending more time on watching television, playing computer games, heavy load of academics, using computers, fewer walks or cycling to school, and insufficient physical education and other school-based physical activities.

Negative effects on children due to lack of playgrounds-

1.  Deterioration in open areas and loss of playgrounds has induced children to engage in smart phones and have increased their screen time. A report by Common Sense Media – which is an NGO focused on helping children, parents, and educators navigate the world of media and technology, stated that in 2013, children spent about 15 minutes a day staring at the mobile screen and now they spend 48 minutes a day. The report also found that 42% of children aged 8 and younger now have their own electronic devices such as tablets and phones, which is a steep rise from 7% four years ago and less than 1% in 2011. Lack of open spaces such as parks and playgrounds indicates that nowadays children spend most of their time indoor, playing video games, watching television and surfing internet.

2.  Decline in playgrounds causes lack of physical activity which is one of the greatest contributors of childhood obesity. In 2009, The National Youth Risk Behavior Survey conducted a survey among students in grades 9–12 in public and private schools. The reports stated that 23% of students did not participate in any type of physical activity. NYRB stated that the availability of and accessibility to play amenities (e.g., parks, gardens and playgrounds) is regarded as one of the indispensable elements affecting childhood obesity.

3. Regression in the number of playgrounds has also led to severe mental health issues in children. In the most recent issue of the American Journal of Play, psychologist Peter Gray emphasizes on lack of play due to decline in outdoor play amenities. In his experiments, 54% of child population showed signs of mental problems such as slow emotional development, anxiety, depression, and loss of attention & self control due to lack of outdoor play spaces.

4. Playgrounds are structures aimed to promote play activities and social interaction of children. Debilitation of playgrounds is rapidly making children to indulge in antisocial behavior and minimizing social interaction with their peers and parents. A report by Health Education Research stated that children who spent 3 to 4 hours of play in a day are more interactive with their family, friends and teachers as compared to those who spend playing outdoor for 30 minutes or less than that.

How to Bring Change

Efforts Made with Social Awareness

While GD carries a weightage of 10 to 20 percent in final selection process, the questions on GK or General Awareness form an important section with a weightage of 15 to 25% in almost all the national level MBA entrance tests including XAT, IIFT, SNAP. They are also the source of discussion during GD, PI, WAT, Extempore topics for MBA admission in IIMs, FMS, MDI, SPJIMR, XLRI and other highly ranked institutes.