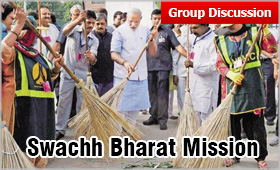 Need for the Campaign

The conclusion
What has aggravated over hundreds of years due to illiteracy and improper habitual activities may not be given up in a short span of few months or years. However the Swachh Bharat Abhiyan has achieved a great success in spreading awareness across the country to get rid of many wrong and unhealthy practices. As a result a good progress has been observed through the Swaccha Bharat mission

Jodie Underhill,  the co-founder of Waste Warriors, a non-governmental organisation (NGO) headquartered in Dehradun, India, that specialises in waste collection and waste management, due to her contribution, has led the Indian media to give her the nicknames 'Garbage Girl' and 'Waste Warrior'. She is a British expatriate, and her work in India has brought her recognition in various forms such as the 'Brand Icon Award' by The Times of India and the 'Green Hero Award' by Center of Media Studies.

एक कदम स्वच्छता की ओर (One step towards cleanliness) is the motto of Swachh Bharat Abhiyan.

Cleanliness is both the abstract state of being clean and free from dirt, and the habit of achieving and maintaining that state. The success of the mission depends upon the collective efforts and not merely on criticizing the campaign by many of those who believe in speaking instead of doing positive.