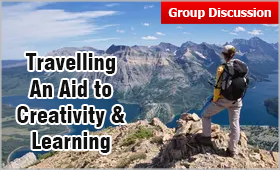 ‘The more you travel, the more learned you are’ – this old saying has proved its substance whenever tested with time and people since beginning. The travelling not only helps one to gain knowledge, generate ideas and earn experiential learning, it helps the mankind tremendously in reaching out to unexplored destinations, expanding business arena, learn cross country culture and civilizations.

Back Ground
What you may find difficult to learn in class rooms with the help of maps and globes, might be learnt with a travelling plan. All the travelers who travelled across the world without any modern means of travelling have helped the world to prepare various global routes, short routes connecting long distances and have helped the human being in developing its creative instinct.

Another exploring traveler from Italy, Christopher Columbus, who completed 4 voyages across the Atlantic Ocean, discovered the viable sailing route to the Americas, a continent that was then unknown to the world till then. He is credited with the opening of the Americas for conquest and settlement by Europeans Vasco da Gama, a Portugese explorer was the 1st first European to reach India by sea. His initial voyage to India in 1497 to 1499 was the first to link Europe and Asia by an ocean route, connecting the Atlantic and the Indian Oceans – the West and the Orient. His discovery was significant as it opened the way for an age of global imperialism for the Portuguese who established a long-lasting Colonial empire in Asia.

Travelling: Means of Creativity
Travelling has been viewed as a source of adventure and unwinding stress of daily life, but recently it has been recognized as a means of creativity and experiential learning. In India, the number of travelers is increasing year after year. More people are travelling to domestic and even international destinations. The following figures evidently shows a similar picture-

Number of Travelers in India

In a tourism survey, it was revealed that more than half of the Indian travelers prefer traveling for relaxation, and to relieve themselves from their busy daily schedules. A majority (50%) of people stated that they travel in search of adventure, while some (42%) reported travel to spend quality time with their friends and family. The rest of the major reasons to travel included self-exploration (41%), discovering different cultures (38%), and establishing status and prestige (38%).