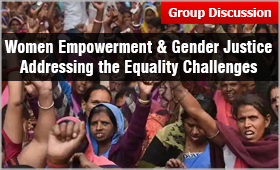 Women Empowerment & Gender Justice: Addressing the Equality Challenges
Women Empowerment has become a highly debated social issue not only in India but also around the Globe. Is the woman’s voice heard or it continues to be neglected despite all the civilization advancement?

Hearing the independent women’s voice and helping the women to ensure that their voices are heard has given rise to #MeToo Campaign, NGOs coming forward to safeguard against the women’s emotion abuse. Government of India has also enacted various rules and regulations within the constitutional framework to improve female representation in different professions. As such not only IIMs but also many other B-schools, other professional institutions, as well as job opportunities in almost all types of male dominated professions including Indian Air Force, Navy and Army have started awarding higher weightage to female candidates for gender diversity.

Women Empowerment has become a hot Group Discussion topic for MBA admission. MBAUniverse.com presents an indepth analysis of this MBA GD Topic that analyses the current state of gender equality, problems and solutions.

Gender Equality: Time has Changed Now
Gender equality is something that we have strived for, for a long time. Be it in terms of gender roles, right to education. The times have changed tremendously, but much more needs to be done. Gender inequality acknowledges the fact that being of a different gender leads to difference in lived experiences. Key milestones in improving Gender Equality are:

Education: Literacy Rate Goes up
While at one time, girls were just supposed to do household work and not go to school, the times have changed tremendously and now women and men work hand in hand in all kinds of jobs and have an equal right to a proper education. The world literacy rate of adult females (ages 15 and above) has gone up from 77.7% in 2005 to 82.6% in 2016 according to World Bank Data. In India too, the female literacy rate has seen a drastic increase from 50.82% in 2006 to 62.98% in 2015. Though the Indian statistics are much lower than the world’s, the direction seems to be right.

Social Reforms Empowering Women
While India has long illegalised derogatory practices like Sati, child marriage and female foeticide, the recent reforms taken to further uplift the status of females in society are applause-worthy. On 22 August 2017, the Indian Supreme Court passed a judgement which made the practice of instant Triple Talaq (Talaq-e-Biddat) unconstitutional. This judgement was further followed by the the Muslim Women (Protection of Rights on Marriage) Bill passed by Lok Sabha on 28 December 2017.

Also, the ancient Sabarimala Temple in Kerala that had barred women aged 10-50 from entering. On 28 September 2018, the Supreme Court allowed women of all ages to enter the temple and follow their devotion and religion calling the practice of exclusion based on menstruation to be a form of ‘untouchability’ which was in violation of the Constitution.

Middle Eastern Country Reforms: More Freedom to Women
The Middle Eastern Countries which are widely known for their oppressive laws for females and the parda system which bars women from showing their faces, have also come a long way. Though the progress in uneven in different countries, it is progress. On 24 June 2018, Saudi Arabia lifted its ban and allowed women to drive. Though women are now getting political recognition, there is still much to be done in relation to laws for crimes against women.

Female Representation in Different Professions
As opposed to earlier times when women participation in professions was limited to a few fields like medicine and teaching, today, women are a part of almost all industries. Though not the optimal number of females are seen on the panels but they are being given a chance nonetheless. In October 2018, Gita Gopinath was appointed as the first woman IMF Chief Economist. Apart from this, women can now be seen at top positions in several fields like Mary Barra (CEO of General Motors), Janet Yellen (Chair of Federal Reserve of US), Indra Nooyi (CEO of PepsiCo), Hillary Clinton (Presidential Candidate of US) and many more.

Problems in Gender Bias: Still Need Addressing
Though women have come a long way, they still face discrimination in the society, there are still people who do not like a woman having voice, there are still heinous crimes against them.

Violence Against Women
The news is lined up with events of rape, molestation, harassment, acid attacks, trafficking and many more heinous crimes all over the world. According to UN Crime Trend Statistics 2013 the rape incidences (number of rapes per 1,00,000 population) is highest in UK followed by USA and Brazil. However, the number of reported rape cases are highest in USA followed by Brazil and India. This fares so say that the situation is somewhat the same regarding women in developing as well as developed countries. Though countries where women do not face direct violence at such staggering levels, they are generally oppressed and restricted by law to behave in a certain manner.

Women’s Emotional Abuse
Constant eve teasing, stalking incidents and the general comment about how a woman shouldn’t do something following a common notion of what the roles are acceptable for women in society constitute emotional abuse. The continuous harassment, be it in form of nasty comments, objectification or oppression are all a cause due to which women are not able to achieve their potential in society. There is constant scrutiny on how they should dress, walk, talk and behave. Middle Eastern countries recognise only male guardianship, have laws on a dress code for women. Even polygyny is common in some nations however, the same rights are not given to women.

Wage Disparity at Work Place
Though women are now seen as a part of professions and seen working in all kinds of professions, they do face differences in pay compared to their male counterparts who do the same work and put in the same hours. According to the World Economic Forum’s analysis of 144 countries, the global gender pay gap is 23% with even the most gender-neutral country, Iceland has a pay gap of 15-20%. In January 2018, Adobe Inc. announced absolute pay parity in India, this is just a baby step in the global battle against achieving pay parity on basis of gender.

Female Genital Mutilation (FGM)-
If the crimes from the external world weren’t enough, some cultures require women to undergo mutilation of external genitalia for non-medical reasons. This is common in some cultures of Africa, Asia and Middle East. The practice involves partial or total removal of external genitalia in females. The simple reason for FGM being done is that it is part of the culture and is believed to help the female in some way, however all it causes is immense pain due to no anaesthetics being used by the practitioners who carry out the deed without any professional training. Long term problems may include problem in child birth, pain and mental health issues.

Empowering Women: Need is More
Women empowerment is a sensitive issue which has opinionated views from everyone. it has a lot of support globally, but also quite many hindrances. The past year has seen quite a lot of commotion on this front with women coming out and demanding their rights and seeking justice for the wrong done to them.

Metoo
This is movement against all kinds of sexual harassment and assault. The term was originally coined in 2006 by Tarana Burke, American social activist but the term gained global popularity in 2017 after sexual abuse allegations against Harvey Weinstein. The movement initially started off in the US and a second wave of ignition was seen in India in October 2018. The movement mainly aims at bringing out the seriousness and globality of sexual abuse across the world and in all strata of the society. This movement has helped women come forward and share their stories.

HeForShe
This is a campaign started by the UN in 2014, with the goal of raising individuals to stand up and take action against negative stereotypes and behaviours in any form. The campaign has reached out to men to stand up for their female counterparts as the motto of the campaign is “Gender equality is not just a women’s issue; it’s a human rights issue that benefits everyone.”

Time’s Up
This is movement against sexual harassment founded on January 1, 2018 by Hollywood celebrities in response to #MeToo Movement. This is an action-based approach to achieve safety for women and equality in workplace. The movement has raised around $22 million for legal defence funds and 800 volunteer lawyers. The movement not only promotes gender equality but all forms of equality at the workplace. To show their support for actors of colour, many celebrities arrived with activists of colour at the Golden Globes Awards in January 2018.

Feminism
The term feminism has been around for a long time, however is commonly taken synonymous to man-hating whereas feminism actually asks women to be treated equal to men in all respects. On describing feminism, Priyanka Chopra said, "Feminism is women standing up for themselves and saying 'Give me the freedom to make my own choices without judging me.' It is not superiority. It is not hating or berating men. It is just saying, 'Let me make my decisions without shaming me or trolling me. Give me those opportunities that men have enjoyed for such a long time."

What the world needs is everyone, irrespective of their gender, to stand for gender equality. The former First Lady of US said, “Let's be very clear: Strong men - men who are truly role models - don't need to put down women to make themselves feel powerful. People who are truly strong lift others up. People who are truly powerful bring others together.” That is exactly how equality should be viewed and unless we all stand together it might never be achieved.