$5 Trillion Economy: The Vision, Challenges and Roadmap for India 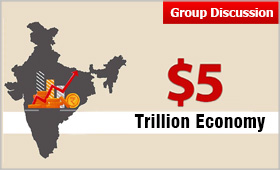 On 15th August 2019, delivering his 6th Independence Day Speech, Prime Minister Narender Modi expressed confidence that India would be a $5-trillion economy in 2024. More recently, speaking at a function to mark 100 years of ASSOCHAM in New Delhi on 20.12.2019, Prime Minister Modi said that BJP-led government has given the country a solid foundation so that it can achieve its target to be US $5 trillion economy by 2024. “The country has made itself so strong in the last five years that we can set such targets and achieve them too,” he said.

Earlier, in July 2019, the Economic Survey laid out a blueprint for $5 Trillion India economy. The Economic Survey 2019 presented by Chief Economic Adviser (CEA) Krishnamurthy Subramanian focusses on moving to a “virtuous cycle” of savings, investments and exports to transform India into a $5 trillion economy in the next five years.

While the Vision is laudable, Economists point to the rapidly slowing India economy. India’s gross domestic product (GDP) growth has dropped to 4.5% in the July-September quarter of 2019-20, a free fall from the government’s ambitious call for a double-digit growth not so long ago. The International Monetary Fund cut its estimate for India’s growth this year to 6.1% from 7% projected in July, calling on the country to use monetary policy and broad-based structural reforms to address cyclical weakness and strengthen confidence.
“India’s economy is set to grow at 6.1% in 2019, picking up to 7% in 2020,” the IMF said in its latest World Economic Outlook, adding that the downward revision reflected a weaker-than-expected outlook for domestic demand.

In this context, many critics have questioned the feasibility of India achieving $5 Trillion Economy status by 2024.

Given its great importance, MBAUniverse.com expects this topic to appear in GD Topics of MBA Admissions 2020, as well in Essays for IIMs and even Personal Interview. Candidates will do well prepare the background, and both sides of this argument – How can India become a $5 Trillion Economy?

What is a $5-Trillion economy?

Before we move forward, lets understand the term clearly.

Comparison with Major Economies of the World

In the chart below, which the first column is country, next is GDP of the respective country and third columns is “per capita” income of a country. Per Capita income is a more accurate picture of the level of prosperity in the respective country. For example, while GDP of India and UK is nearly same, but a UK resident’s income was 21 times that of an average Indian in 2018!

Initiatives undertaken for achieving $5 Trillion Economy target
Responding to the growth challenges, Government is taking many steps to put the economy back on track. On December 13, Finance Ministry unveiled a detailed presentation on steps taken to boost economy. Chief Economic Advisor Krishnamurthy Subramanian said the government is focusing on increasing consumption to boost economic growth. Presenting steps taken by the government in the past few months to pull the economy out from a six-year low growth, he said the measures include corporate tax cuts to improve risk-return of companies.

Here's a list of all measure announcements that were made:

How to achieve $5 Trillion Economy Target
Going forward what steps can Government take to get closer to its target. Niti Ayog CEO Amitabh Kant recently outlined these steps.

1. Increase Ease of Business and Ease of Living to promote private investments
Over the last four years, the government has scrapped over 1,300 antiquated law! It has done away with a lot of archaic procedures, rules and regulations.

2. Urbanization – a big driver of growth
Cities account for less than 5% of the earth land mass, but they account for over 75 % of the global GDP! So, Urbanization in cities is important as they are centers of economic growth.

While the process of urbanization has ended across America and Europe, and matured in China, it has just begun in India. In the next 5 decades, India should see more Urbanization than what we've done in the last 500 years. While there will be many challenges, India needs more Urbanization to grow rapidly.

3. Globalization for growth
India exists in a globalized and interdependent world. Like in Japan, Korea and China, Globalization has helped large sections of population to be lifted above the poverty line. India's share in global export is less than 2%. So, India must learn the art of size and scale, of manufacturing to size of scale and to penetrating.

4. Women Participation is key
India cannot grow at high rates over a 3-decade period without gender parity. In India, only 26% of the women work; the worldwide average is 48%. If such a major chunk of the population is not working and we consciously don't put women into positions of power, it will be very difficult for India to grow.

5. Agriculture Reforms in vital
It's not possible to grow over long periods of time without some very major structural reforms in the agriculture sector because that's where close to 60% of India lives. You can't keep growing on subsidies, you can't keep going on just giving assistance to farmers without ensuring better markets, without putting technology, without contract farming and so on. Agriculture sector reforms are critical.