Budget Cycle Change: Only a move of convenience 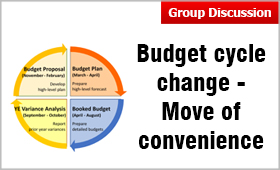 The Government of India has decided to advance the presentation date of the Union Budget by a month from February to January with an objective get all allocations at different tiers disseminated to budget-holders, before the financial year begins on April 1.

After the decision, Union Budget 2017-18 was the first Budget presented on February 1, 2017 instead of February 28. The decision became a subject of national debate with many politicians, economic experts and fiscal policy experts weighing pros & cons on the topic.

The second in the row was the Union Budget 2018-19 which was presented on February 1, 2018. IIMs and other top B-schools included this topic in their final selection round. Below are shared the key facts, pros and cons of pre-poning the date of presentation of Union Budget

The legacy of presenting the Union Budget on last working day of February has been done away with. Since the British period Union Budget has continued to be presented on February 28 or 29 in a leap year.

Government has found the preponed date of Budget presentation a better idea as it will solve many issues like delay in start of implementing the budget proposals.

Earlier, during Atal Bihari Vajpayee’s NDA government, the then finance minister Yashwant Sinha had also departed from the tradition of presenting the budget at 5PM and changed the time of the presentation of the Union Budget at 11AM in 2001. Since then 11AM Budget presentation time is followed.

The Finance Ministry had proposed that the Budget Session be convened before 25 January, a month ahead of the current practice.

It looks fine as it may be more convenient for the Union Government to pre-pone the Union Budget presentation date and to get the Budget constitutionally approved by Parliament and assented to by the President.

The move of the Government, however, not only breaks the established practice but is also considered fraught with number of issues which could hinder the correct or nearly correct estimation of expenditure and income for next year as well as the scrutiny issues.

Keeping the convenience aside, now the Government needs to think over following issues that may arise due to advancement of Union Budget Presentation date: