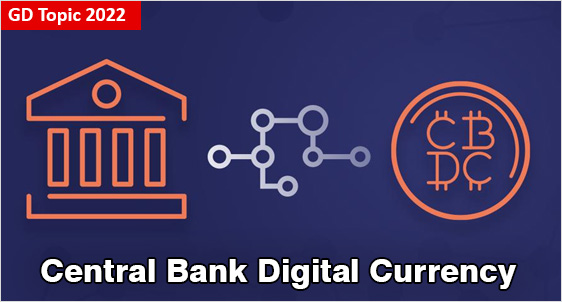 What is Central Bank Digital Currency in India (CBDC)?
CBDC, also known as National Digital Currency in India, is a digital form of Government backed ‘Fiat Currency’ which can be transacted using wallets backed by blockchain and is regulated by the central bank. It is a ‘legal tender’ issued by a central bank in a digital form.So, instead of printing paper currency or minting coins, the Central Bank issues electronic tokens. This token value is backed by the full faith and credit of the government.

Though the concept of Central Bank Digital Currency (CBDCs) was inspired by Bitcoin, it is different from decentralised virtual currencies, which are not issued by the government and lack the ‘legal tender’ status.

So CBDC has the potential to provide significant benefits.

Concerns & Issues:
However financial experts point out to some concerns too.

The creation of a Digital Rupee will provide an opportunity for India to empower its citizens and enable them to use it freely in our ever-expanding digital economy. However, looking into its vast impact on banking systems and money markets, it is imperative that policymakers keep thorough due diligence and put necessary checks and balances for smooth roll out of Digital Rupee in India.