Corruption in Economy: It is the root cause for Indian Economic slowdown 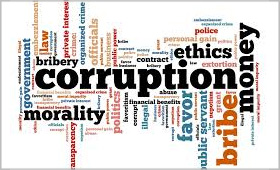 MBAUniverse.com has started a new expert series of GD PI WAT preparation for MBA Admission 2014. This series of articles will help aspirants prepare for their GD PI WAT by providing them valid contents, probable topics and experts advice to help you succeed during admission process at various B schools. This article is based on the GD Topics “Corruption is the root cause for Indian Economy slowdown” to help you provide inputs for your group discussion rounds.

Background
The topic has two parts – A. The rampant corruption in India and B. Its adverse impact on growth of economy. MBAUniverse now takes you a step further with certain hot and specific view points to sharpen your penetration on this contemporary discussion.

Arguments for the topic
Lot of material is available supporting the topic in the form of newspapers, periodicals, books, electronic media etc. The aspirant is suggested to read the same, form systematic pattern to present the same instead of putting forward scattered presentation.

Arguments against the topic
Please remember we can find more core points and arguments for the topic. You cannot say that India is a corruption free or very less corrupt country nor you can deny the facts placed with the support of reports and data. Hence you must present the things like causes, remedies, and other favorable making it a point that the things are not flimsy or should not contradict your own points.

Make a positive approach to conclude – P S Bawa, Chair of Transparency International India, stated “Corruption is a hydra-headed monster and governments have to make efforts to tackle it from all sides. This can only happen if all stakeholders work together," the efforts being taken by the watchdog to create awareness about corruption among people and steps being implemented to curb the menace have to be intensified to achieve a higher growth rate and improve the image of the country creating a better environment for investment and employment. India requires a transparent and effective policy implementation with more employment and business opportunities to curb corruption and move fast on the path of growth.