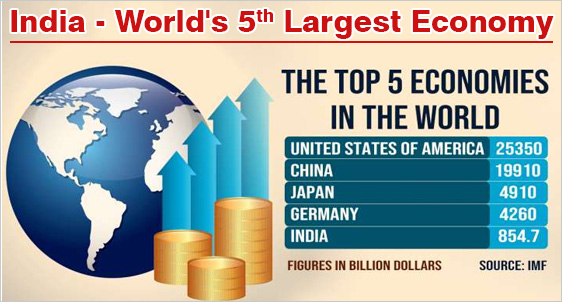 Leaping from the 11th place as World’s Largest Economy a decade ago, India has now overtaken United Kingdom to become the 5th largest economy in the world in the year 2022. Latest figures and data from International Monetary Fund reveal this fact. Besides, India’s economy is forecast to grow by 7% this year. IMF sees India to become the world’s 4th largest economy in 2027 in terms of GDP

India’s Ranking is accompanied by a period of rapid inflation in the UK, creating a cost of living crisis and the risk of a recession which the Bank of England predicts could last into 2024. This situation, coupled with a turbulent political period and the continued hangover of Brexit, led to Indian output overtaking that of the UK in the final quarter of 2021, with the first of 2022 offering no change in the growth Ranking India’s Economic Growth in 2021-22
The lead was scored during the last three months of 2021 and extended in the first quarter of 2022. India has jumped six positions over the last decade. A decade ago, India was in the eleventh position while the UK occupied the fifth rank. India has also extended its share in the global GDP by nearly one percentage point since 2014 when it was the 10th largest economy in the world. India’s share in the global GDP is now 3.5 percent as against 2.6 percent in 2014. There are projections that by 2027, it will rise further up to 4 per cent, overtaking that of Germany.

Achievement for India in Azadi ka Amrit Mahotsav year
India is celebrating the 75th anniversary of freedom from British colonial rule this year and the achievement is made at the most appropriate time. The symbolic value of overtaking the former colonial master within 75 years of Independence cannot be overemphasized.

India as World’s 5th Largest Economy: Calculation in US Dollars
The calculation of GDP figures is based on US dollars, according to GDP figures from the International Monetary Fund. The size of the Indian economy in “nominal” cash terms in the quarter through March was USD 854.7 billion, on an adjusted basis and using the dollar exchange rate on the last day of the relevant quarter. On the same basis, the UK was USD 816 billion.

India is likely to be the fastest-growing economy in the current fiscal year. Its GDP growth rate in the first quarter of the financial year 2022-23 is an impressive 13.5 pc. A report by the State Bank of India projects that during the current financial year, the Indian economy will grow by a rate between 6.7 to 7.7 percent.

India has been breathing down UK’s neck since last year. A difference in the method of calculation probably made India wait a little bit more. Figures for other countries are calculated on a calendar year basis, but those for India are computed on a fiscal year (April-March) basis. So, 2021 would mean 2022 for India.

If the figures are rounded off, both UK and Indian economies were roughly placed at USD 3.2 trillion in 2021. Investment Information and Credit Rating Agency (ICRA) Chief Economist Aditi Nayar predicted in July 2022 that India would overtake the UK within months.

It may be useful here to recall the story of how earlier India overtook France as the sixth largest economy in the world, for a perspective. India was on a level with France in 2017. Then next year in 2018 too, both the economies were tied at USD 2.7 trillion, but by 2019 India overtook France, by USD 100 billion. The gap widened to USD 210 billion in 2021. In fact, if the ranking of national economies were based on purchasing power parity (PPP), which takes into account the cost of living in a country while converting currency into dollars, India’s position would be even stronger. In PPP terms, India continued to be the third largest economy in the world in 2021. The economy stood at USD 10.22 trillion, which was almost twice the size of Japan, which was the fourth largest economy in the world in PPP terms, with a USD 5.4 trillion economy.

The rise of the Indian economy to the fifth largest position was accompanied by several other recent positive developments. India’s weighting in the Morgan Stanley Capital International (MSCI) emerging markets rose to the second spot, behind only China. In October 2020, India’s weighting was around 8.1 pc, with 87 stocks being part of the index. By November 2021, the weighting leapt to 12.3 pc with 106 Indian stocks now entering the fray. At the same time, India has been taking rapid strides in export, penetrating markets earlier monopolized by China. According to US Customs data, as quoted in a report in The Straits Times on September 5, seaborne shipments of festival goods and accessories to America touched USD 20 million, almost triple the value from the year-ago period.

India has now become one of the top five suppliers of Christmas decorative items and T-shirts to the United States. The trend is not limited to Christmas goods. Exporters in Asia’s third-largest economy have been observing a significant uptick in orders from both the US and Europe. The rising demand is noticed particularly in low-cost, labour-intensive sectors such as apparel, handicrafts and non-electronic consumer goods. China’s continued decoupling from the global economy offers an opportunity for India to focus its investment in longer-term competitiveness and prioritize “winnable” sectors. According to a report by management consulting firm Kearney and the World Economic Forum, by 2030, India is projected to have the world’s largest labour force, and could contribute more than USD 500 billion annually to the global economy.