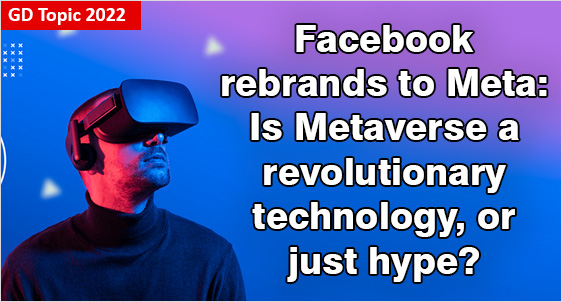 In 2021, Facebook was renamed "Meta Platforms" and its chairman Mark Zuckerberg declared a company commitment to developing a metaverse. While the facebook rebrands to Meta, this has made Metaverse the new buzz word in the business and social world. Some Experts compare Metaverse in 2022 to where Internet was in 1970s in US. Clearly a lot lies ahead! And some experts are already taking about its negative impact. Given the importance of Metaverse as a GD Topic, MBAUniverse.com presents important information about this Latest GD TOPIC 2022.

What is a Metaverse?
The concept of “metaverse” is still early in its evolution, and there is no one, all-encompassing definition as yet. MBAUniverse.com researched key resources on how do they define this term.

The term "metaverse" has its origins in the 1992 science fiction novel Snow Crash as a portmanteau of "meta" and "universe." Various metaverses have been developed for popular use such as virtual world platforms like Second Life.The term has seen considerable use as a buzzword for marketing purposes to exaggerate development progress for various related technologies and projects.

Wikipedia defines it as, “A metaverse is a network of 3D virtual worlds focused on social connection.In futurism and science fiction, it is often described as a hypothetical iteration of the Internet as a single, universal virtual world that is facilitated by the use of virtual and augmented reality headsets.”

Explaining metaverse, WIRED magazine says, “Broadly speaking, the technologies that make up the metaverse can include virtual reality—characterized by persistent virtual worlds that continue to exist even when you're not playing—as well as augmented reality that combines aspects of the digital and physical worlds. However, it doesn't require that those spaces be exclusively accessed via VR or AR.”

A JP Morgan 2021 December report says, “The metaverse is a seamless convergence of our physical and digital lives, creating a unified, virtual community where we can work, play, relax, transactand socialize…Themes of what the metaverse is and could be, however, are emerging.”

Why Metaverse is in news?
In last few months, many global companies are investing in metaverse-related technologies creating headlines across the world.

So, what is the present state of metaverse? Here are key current applications…

Future Potential of Metaverse:
Supply and demand dynamics are driving more people into the meta-economy. This, in turn, will necessitate the development of new skills and generate new opportunities to make money. Companies and experts point out to many future use cases.

Criticisms
Some experts point out to many misuses of this developing platform.