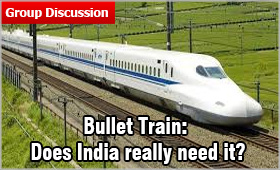 The highly ambitious dream of India's first high-speed bullet train which would run between Ahmedabad and Mumbai is close to becoming a reality. According to Piyush Goyal, Union Railway Minister,the operations for this project will commence from 2022. Though bullet trains will usher a new era of growth and development but the investment capital is humongous. In this backdrop, the issue becomes highly debatable and may appear in GD of some B-schools. The article below has been written to throw some light on the project, key statistics and its pros and cons.

Background:
The Indian Ministry of Railway prepared the “Indian Railways Vision 2020” in December 2009, and proposed seven routes that are candidates for the construction of high-speed-railways or Bullet trains.The line between Mumbai and Ahmedabad (approximately 500 km long) has been declared as the first high-speed railway section to be planned and constructed.

Why bullet trains are needed:

Tips to improve participation in GD round
The above discussed topic is one of the most talked about issue; therefore it has been carefully chosen and solved with the sole aim to help you succeed in GD round. If you follow the few key tips, you can improve your chances to get through the GD round.