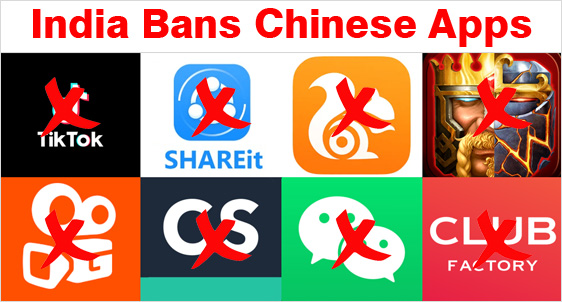 On September 2, 2020, India has banned 118 more Apps including the mobile game app PlayerUnknown’s Battlegrounds (PUBG). The move by Government of India comes in the backdrop of the tension between India and China on the Line of Actual Control (LAC). Since May 2020, Chinese Army known as People’s Liberation Army (PLA) has been resorting to aggressions in a bid to shift its boundary with India in Ladakh region.

This is the third move by India to ban Chinese apps. On June 29, citing the “emergent nature of threats” from Chinese mobile applications like TikTok, ShareIt, UC Browser and CamScanner, Indian Government decided to ban 59 apps. The move was partly seen as a counter move amid the tense border standoff between India and China that led to 20 Indian Army personnel being killed on June 15.

The second round of ban on apps came on July 23, when the Minstry of Information & Technology took down mirror applications which were functioning despite the ban.

Since this issue impacts both Politics and Economy, it is a hot GD topic for MBA, BBA and other competitive entrance exams. MBAUniverse.com editorial team has prepared the highlights, Pros and Cons of this topic for your easy reference.

Why Indian Government decided to ban
On June 29, Indian Government decided to ban 59 apps. “The Ministry of Information Technology has received many complaints from various sources, including several reports about misuse of some mobile apps available on Android and iOS platforms for stealing and surreptitiously transmitting users’ data in an unauthorised manner to servers which have locations outside India,” the government said in a statement. “The compilation of these data, its mining and profiling by elements hostile to national security and defence of India, which ultimately impinges upon the sovereignty and integrity of India, is a matter of very deep and immediate concern, which requires emergency measures,” it said. “On the basis of these and upon receiving of recent credible inputs that such Apps pose threat to sovereignty and integrity of India, the Government…has decided to disallow the usage of certain Apps, used in both mobile and non-mobile Internet enabled devices,” it said. Government spokesperson said that Google’s Play Store and Apple’s App Store have been directed to remove the apps.

India may be the first country to ban Chinese apps but it is not the first one to raise concerns about the privacy and security. Only recently, the US national security advisor Robert O'Brien said all Chinese companies function as arms of the Communist Party of China (CPC) to further its ideological and geopolitical agendas. The CPC, in O'Brien's words, "is collecting your most intimate data -- your words, actions, purchases, whereabouts, health records, social media posts, texts and mapping your network of friends, family and acquaintances it is not telecom hardware or software profits the CPC [is] after, it is your data. They use 'backdoors' built into the products to obtain that data. This is micro targeting."

The Context: A Belligerent China
China, under Xi Jinping, has turned increasingly belligerent over the last few months. Not just India, it is fighting other neighbors like Vietnam, the Philippines, Japan, Indonesia and Australia in territories it claims belong to it. Analysts say this is Chinese Governments way to distract the focus of both its citizens and the world, given that China is the origin of the devastating coronavirus.

In a bloody skirmish, 20 Indian Army personnel were killed on June 15. Since then India is seeing heightened tensions on China border in Ladakh area. It has also noticed some Chinese activity in Pakistan-occupied Kashmir. Not only this, the Nepalese government, usually an ally, has also lately acted hostile to India, with China tacitly egging the Himalayan kingdom on.

India, a big market for Chinese Apps
Chinese Apps like TikTok and Shareit have been topping Google's Android ecosystem, which accounts for 90-95% of smartphones in India. For example, Indians clocked 5.5 billion hours on TikTok in 2019, an increase of over five times from the 900 million hours spent in 2018. While Facebook is ahead in India, with total hours spent on the platform at around 25.5 billion hours, TikTok has been catching up fast by aggressively capturing new users. The TikTok app was downloaded 323 million times across Apple’s App Store and Android devices in India in 2019 — over twice the 156 million times Facebook was, according to Sensor Tower data reported by Times of India in January.

Around 30% of Tik Tok’s user-base, according to Reuters Breakingviews which, in turn, cites SensorTower data, comes from India; cutting off this base will hit the valuation of its parent ByteDance. ByteDance is estimated to be worth around $110 billion and also owns Helo whose users are all from India. Similarly, UC Browser has a 12-13% market share of the browser market in India, making it the second-largest way to access the internet after Google’s Chrome.

TikTok & Helo
The two social media apps, operated by an entity called Bytedance (India) Technology, together command more than 170 million active users across the country. Notably, India is the largest market for TikTok with more than 611 million downloads, representing nearly a third of the video-platform’s base, followed by China (where it operates under a different brand) and the US.

UC Browser and UCNews
The Alibaba Group platforms are run by an entity called UCWeb Mobile Pvt Ltd, which has more than 130 million active users. UC Browser, in fact, is the second most used mobile Internet browser in the country only behind Google Chrome, with a market share of around 22%, compared with Chrome’s 70%.

ShareIt
ShareIt is one of the most popular file-sharing tools, with more than 400 million active users in India. The app, which was almost entirely marketed on the basis of word of mouth, has more than 1.8 billion users worldwide.

Club Factory
The online marketplace, which claims to be India’s third-largest e-commerce company, has managed to onboard 30,000 sellers on its platform.

CamScanner
CamScanner, which is the most widely used mobile scanning app in the world, has more than 100 million users in India.

What has China’s response been to the ban?
China says that India’s actions could be in violation of the World Trade Organization (WTO) rules. Reacting to the development, Chinese Embassy in New Delhi said, “India’s measure selectively and discriminatorily aims at certain Chinese apps on ambiguous and far-fetched grounds, runs against fair and transparent procedure requirements, abuses national security exceptions, and [is suspected] of violating the WTO rules. It also goes against the general trend of international trade and e-commerce, and is not conducive to consumer interests and the market competition in India.” So, Chinese could file a formal complaint at the WTO.

Indian Apps like Chingari, Mitron and Trell have been benefiting from the Chinese App ban. On June 29, founder of India-made video-sharing platform Chingari, Sumit Ghosh, tweeted, “100,000 downloads per hour, guys please be patient! We are working on the servers and getting things up and running asap!” Chingari competes with hugely popular Tik Tok, another video-sharing platform. The app recorded a staggering 3.5 million downloads in less than 48 hours of the government’s move.

Mitron, a short video platform which is another alternative to the popular Tik Tok, too has witnessing a steady growth, saw a stellar rise in downloads post the banning of Chinese apps. The app took 70 days to cross the 10 million milestone without any marketing. However, in just three days after the Chinese App ban, the app’s total download has doubled. At present, Mitron has 22 million downloads!

Moj, a video-sharing app by ShareChat, has seen over one million downloads within a week after TikTok and several other Chinese apps were banned in India due to prevailing Indo-China border tensions. The Moj app is similar to TikTok app; it allows its users to share short clips and to give these videos special effects, and emoticons.

Similarly, Trell, a lifestyle community commerce platform, has witnessed a huge upsurge in the app’s downloads. The app has witnessed a steady 25 times growth in the past one year.

There are many other Indian apps that are finding favors with patriotic Indians.

Pros and Cons of Chinese App Ban
In a GD Round, based on information, you should be able to identify Pros (advantages) and Cons (disadvantages) of any development – and then take a position and argue out your case logically. In this case, you should be able to either say the Chinese App Ban is Pro India (Good for India) or it’s a Con (Bad for India) for India. Below are some of the points you can use.

Pros for India
It is early days yet, but by all accounts, the move to ban these Chinese apps seems to be a well-thought-out move. Here are some positives from the move.

Cons for India
If China retaliates with economic measures, its impact on India can be significantly larger. Hence, there can be following disadvantages of this move.

The chart depicts the imported products for which India depends on China the most. For instance, 76.3% of all antibiotics imported by India are from China. 2. May have impact on Chinese Investments
Many Indian unicorns have a Chinese investor. The chart depicts the estimated investment by Chinese companies in select start-ups. 3. Protectionism reduces competitiveness and innovation: This may have a long-term impact on performance of Indian companies. Also, Google and Facebooks may get a free run in India and may become exploitative.

To end, candidates must understand both Pros and Cons of any topic and argue with facts and logic. Using data and information cited above you can do the same for this topic.