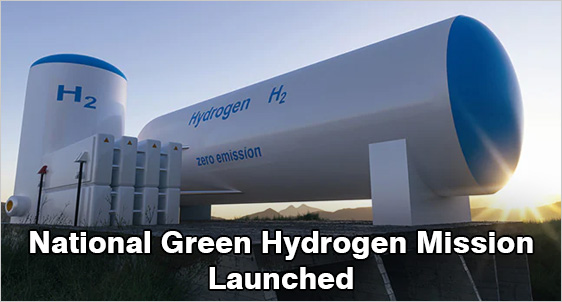 Mission aims to make India a Global Hub for production, utilization and export of Green Hydrogen and its derivatives. Mission will help in India becoming energy independent and in Decarbonisation of major sectors of the economy. The Union Cabinet, chaired by the Hon’ble Prime Minister Shri Narendra Modi, has approved National Green Hydrogen Mission. The initial outlay for the Mission will be Rs.19,744 crore, including an outlay of Rs.17,490 crore for the SIGHT programme, Rs.1,466 crore for pilot projects, Rs.400 crore for R&D, and Rs. 388 crore towards other Mission components.

MNRE will formulate the scheme guidelines for implementation of the respective components. Ministry of New & Renewable Energy will be responsible for overall coordination and implementation of the Mission. All concerned Ministries, Departments, agencies and institutions of the Central and State Governments will undertake focussed and coordinated steps to ensure successful achievement of the Mission objectives.

Given the importance of this development, “National Green Hydrogen Mission launched; Can India lead the world in Green Energy?” is a hot GD Topic 2023. It can be part of MBA Essay Writing, WAT, Extempore and Personal Interviews for MBA admissions for IIMs and other competitive exams. So MBAUniverse.com recommends MBA aspirants to read this topic carefully.

India has just begun to generate green hydrogen with the objective of raising non-fossil energy capacity to 500 gigawatts by 2030. At the World Economic Forum in Davos, Switzerland, in May 2022, Minister of Petroleum and Natural Gas Hardeep Singh Puri said India will emerge as the leader of green hydrogen by taking advantage of the current energy crisis across the globe. His assertion came almost a month after Oil India Limited (OIL) commissioned India’s first 99.99% pure green hydrogen plant in eastern Assam’s Jorhat.

National Green Hydrogen Mission: Expected Outcomes by 2030
According to the government, the Mission will result in the following likely outcomes by 2030:

National Green Hydrogen Mission: Key Benefits
According to the government, the Mission will have wide ranging benefits including

India’s Green Hydrogen production capacity is likely to reach at least 5 MMT per annum, with an associated renewable energy capacity addition of about 125 GW. The targets by 2030 are likely to bring in over Rs. 8 lakh crore investments and create over 6 lakh jobs. Nearly 50 MMT per annum of CO2 emissions are expected to be averted by 2030.

An enabling policy framework will be developed to support establishment of Green Hydrogen ecosystem.  A robust Standards and Regulations framework will be also developed.  Further, a public-private partnership framework for R&D (Strategic Hydrogen Innovation Partnership – SHIP) will be facilitated under the Mission; R&D projects will be goal-oriented, time bound, and suitably scaled up to develop globally competitive technologies. A coordinated skill development programme will also be undertaken under the Mission.

National Green Hydrogen Mission is a good step to improve India’s energy independence and to showcase India’s efforts in Green energy domain. However, effective implementation of this ambitious scheme is key to producing desirable results for India.