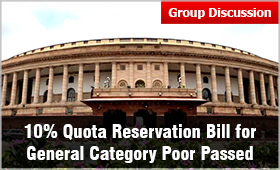 The Rajya Sabha on January 9th, 2019 passed the landmark Constitution Amendment Bill to provide 10 per cent reservation in Jobs and Education, including IIMs, IITs, NITs and Central Universities, to economically backward sections in the General Category. The Bill amends Articles 15 and 16 of the Constitution. It adds clause (6) in Article 15 to enable the state to provide reservations for economically weaker sections other than SCs, STs and OBCs. The Lok Sabha had earlier passed the Bill a day before. It became a law after President Ram Nath Kovind also signed it.

In a series of tweets, Prime Minister Modi said: "Glad to see such widespread support for the Bill. The House also witnessed a vibrant debate, where several members expressed their insightful opinions.”

Here is some good news for MBA Aspirants. On 15.1.2019, HRD Minister Prakash Javadekar announced that this Reservation will be extended in higher education to all private institutions including IIMs from the new academic session starting July 2019. “Under the 124th Constitutional amendment, the HRD Ministry has decided that from this year itself the quota for EWS category will be applicable. While implementing this, we will ensure that reservation for SCs, STs and OBCs does not get affected. Hence, there will be more seats,” Javadekar told media.

According to MBAUniverse.com estimates, currently, across 20 IIMs, there are about 5,000 MBA seats. This number may be increased by more than 1000 seats in coming years.

What is 10 % reservation Bill on Education
Here is some good news for MBA Aspirants. The 10 per cent reservation bill will benefit the poorer sections of the upper caste Hindus and other religions who at present are not beneficiaries of any quota.

Institutions run by the Centre will have to increase their student strength by almost 25 per cent in order to accommodate the EWS reservation without affecting the current number of SC, ST, OBC and general category seats. Reservation for SCs, STs, OBCs and economically weaker sections in the general category will be extended in higher education to all private institutions including IIMs from the new academic session starting July 2019, HRD Minister Prakash Javadekar announced on 15.1.2019. It is expected that the central government will introduce a Bill in the upcoming Budget session of Parliament to implement this decision.

“Under the 124th Constitutional amendment, the HRD Ministry has decided that from this year itself the quota for EWS category will be applicable. While implementing this, we will ensure that reservation for SCs, STs and OBCs does not get affected. Hence, there will be more seats,” Javadekar told media on 15.1.2019.

It is estimated that the annual intake of all central institutions including IITs, NITs and IIMs, central universities, central open university, colleges and government and government-aided deemed universities is 9.28 lakh seats. Although central institutions will be permitted to stagger the 25 per cent increase, it is not clear in how many years they will have to implement this seat increase.

Currently, across 20 IIMs, there are about 5,000 seats IIM Seats for full-time two-year PGP program considered equivalent to MBA. This number may be increased by more than 1000 seats in coming years.

What will be the impact of this on private Universities and colleges? Currently, student reservation is provided in many private institutions although it is not mandatory under a central law. Hence it may some time before this Law leads to increase in seats in private institutions, which may wait for their respective State Governments to implement the same.

Who will benefit from the 10% quota Bill?
The 10% Quota Bill is applicable to the economically backward amongst all religion: Hindus, Muslims and Christians. Among the major Hindu castes to benefit are Brahmins, Rajputs (Thakurs), Jats, Marathas, Bhumihars, Vaishyas (trading castes) along with other castes that are classified as upper caste in a state.

What are the criteria for the 10% quota Bill?
This is an important thing to remember. A person has to meet following criteria:

During the debate on the Bill in the Rajya Sabha, nearly all opposition parties said the Narendra Modi government had pushed through a Bill full of lacunae with an eye on the 2019 Lok Sabha polls as the BJP’s recent electoral losses in three Hindi heartland states had left it shaken, and cautioned that it was unlikely to survive judicial scrutiny.

Samajwadi Party (SP) and Bahujan Samaj Party (BSP) members have demanded that the quotas for Scheduled Castes and Other Backward Classes, or OBCs, be increased in proportion to their respective populations now that the government had breached the Supreme Court-mandated 50 per cent cap on reservations.

Congress MP Kapil Sibal asked if the government had collected any demographic data on economically weaker sections, and what would happen in states where dalits and OBCs were in majority. He wondered if this Bill would stand scrutiny of the nine-member Bench of the Supreme Court that stuck down 10 per cent reservation to EWS while delivering the Mandal judgment in 1992. Sibal said the central government had managed to create only 45,000 jobs annually in the last five years. “If you give 10 per cent reservation, you will give 4,500 jobs. You brought this Bill to benefit 4,500 people?” Sibal said that breaching the 50 per cent reservation cap was a "violation" at a time when similar cases were pending in the court.