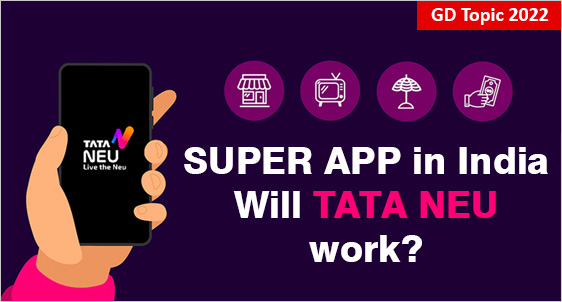 Tata Neu has turned out to be an instant hit among customers and also is high on the list of most downloaded apps. The super app, which ranked 48th on the App Annie list of most downloaded apps in the country across segments on Google Play a day after it was launched (April 8), jumped to the second spot by April 11, a place behind social e-commerce app Meesho, which is at the top for weeks in a row.

Tata Neu’s ranking slipped slightly over the past two days to Number 5 — behind Meesho, Flipkart’s social commerce platform Shopsy (launched last July), Instagram, and Snapchat. On April 7, the day of its launch, Tata Neu ranked 237th; before that its usage was limited to Tata employees and associates. In Apple Store, Tata Neu is already numero uno (in India). It is reigning at the top in the shopping ategory since its launch, according to the App Annie data. Between April 8 and April 10, the super app ranked first on an overall basis, before slipping to Number 4 (on April 13).

Tata Sons Chairman N Chandrasekaran said the super app, over a period of time, will go beyond the Tata brands and offerings. “Our purpose with Tata Neu is to be a trusted partner bringing better life to India’s growing consumer base. We believe there is no solution or an app or an ecosystem, which fully addresses this holistically and which is specifically developed for the Indian context,” said Chandrasekaran at the press conference after the launch of Tata Neu

The Tata Group launched its much talked about super app Tata Neu on April 8, 2022. The $103 billion Tata Group is a diverse conglomerate with interests from software, tea, hotels, steel, apparel, aviation, automobiles and many others. Over the last few years, individual companies have increased their online presence. But, there was hardly any synergies between them. Tata Neu bridges this gap and brings groups individual brands like Big Basket, Croma, Westside, Starbucks, Taj Group of Hotels, Tata Cliq, Tata 1MG, Tata Capital, among others, on one platform. Many of its other companies like Vistara, Air India, Titan Tanishq and Tata Motors will also be onboarded soon.

N Chandrasekaran, the chairman of Tata Sons said, “Our aim is to make the lives of Indian consumers simpler and easier. The power of choice, a seamless experience, and loyalty will be at the centre of Tata Neu, delivering a powerful One Tata experience.” Tata Sons has reportedly injected over Rs 5,800 crore in Tata Digital, taking its total investments in the company last year to over Rs 11,800 crore.

So, what really is a Super App
According to Wikipedia, “A super-app (also written as super app or superapp) is a mobile or web application that can provide multiple services including payment and financial transaction processing, effectively becoming an all-encompassing self-contained commerce and communication online platform that embraces many aspects of personal and commercial life. Notable examples of super-apps include Tencent's WeChat in China, and Grab in Southeast Asia.”

Wikipedia also notes that “super-app term was first used to describe WeChat, an ubiquitous application used by 1.2 billion people, mostly from China. Recognition of WeChat as a super-app stems from its combination of messaging, payments, e-commerce, and much more within a single application, making it indispensable for many users. WeChat's establishment of the super-app model have led companies like Meta (formerly Facebook) to try and build similar applications outside of China.”

Major Super Aps in the World

Other Indian Super Apps are coming…
Neu will give Tata Group a huge legup in an intensely competitive battleground for Indian consumers. Amazon, Reliance Jio and Flipkart offers hundreds of products and services on their Apps. They are expected to increase the uses cases for their Apps. Paytm too has over the years transformed into a super app-like ecosystem, encompassing, payments, investments, ticket booking and shopping. These platforms have also tied up with commercial banks to offer services like co-branded credit cards and personal loans. Reliance Jio too has huge ambitions in the superapp space through platforms like MyJio and JioMart. Reliance Retail’s network of over 12,000 stores and the thousands of Kirana stores that its partnering for JioMart give it a further edge.

Indeed, opportunities for other Apps and Super Apps are immense. It is estimated that India’s consumer digital economy will clock a 10 times growth to become a $800 billion market by 2030. According to consulting firm EY, consumer internet and e-commerce companies raised $38 billion in 2021, increasing from $8 billion in 2020.

So will these Super Apps succeed? Opinions are divided. Many quote the success of Chinese Super Apps, but is the Indian and Chinese context comparable? Let’s find out.

However, apart from convenience and some rewards, there don’t seem to be any outsized benefits for consumers.

Lets try to understand why Super Apps did well in China.

THE CHINESE BACKGROUND
The internet technology landscape has evolved in a different way in different countries. For more than a decade, China closed its doors to the global tech companies like Google and Amazon, and this resulted in creating a few large tech conglomerates like Alibaba and Tencent. These conglomerates offer everything: logistics, payments, entertainment, grocery, taxi-aggregation... They also allowed apps of several small companies to operate within their “super app”. So, consumers never had to leave their super all ecosystem. These Chinese companies succeeded because they were digital first or native digital companies. Their design principles embraced both a customer centric as well as a digital-first philosophy. But can the Indian conglomerates with legacy businesses like the Tata who are creating Super Apps like TATA New be so nimble and customer centric?

There are many difference between Chinese and Indian business and tech landscape. Unlike China, India did not shut out the global tech companies. So, we global brands for every use case -- app for chat in India is WhatsApp, everyday shopping app is Amazon or Flipkart, app for education is Byjus and transportation is Uber or Ola. And then there are many specialized apps for different use cases like grocery buying (Big Basker), pharma/medicine (1 MG), and home-services (Urban Clap).

Overall, Indian customers are quite happy with trying out many competing Apps for different requirements. This healthy competition is also making App businesses more competitive to offer best value prepositions.

So, the question is will Super Apps like TATA Neu succeed? Perhaps answer lies in the question - Do customers want Integration or Decentralization…? If Super Apps can offer great value by integrating services and products meaningfully to make consumer life simpler and richer, they will bite. Else it will remain yet another fad which consumers will side step for specialized apps in their quest for value and convenience.