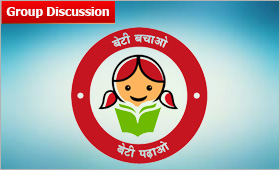 Beti Bachao Beti Padhao: Will it abolish the orthodox mindset?

Hundreds of years have witnessed Indian families not rejoicing on the birth of girl child not only in rural areas but also in educated urban circles. On the top of it, the orthodox families used to go for female foeticide or abandoning the girl child, if at all she happened to be born. Social and family constraints did not allow the Girls to go to school or to opt for higher studies.

Despite all the campaigning and laws framed earlier, the process continued without much awareness. However, after the new Government led by the Prime Minister Shri Narendra Modi took over in 2014, an effective initiative with a new campaign ‘Beti bachao Beti padho’ (Save girl child, educate a girl child) has been launched by the Government of india. The social campaign aims to generate awareness and improve the efficiency of welfare services intended for girls.

Beti Bachao Beti Padhao scheme aims at making girls independent both socially and also financially through education. This approach of the Government can facilitate in generating awareness and improving the efficiency of delivery of welfare services meant for women.

Rising crimes against women
Discrimination against girl infants, for several reasons, has combined with the technology to result in a rise in abortions of foetuses identified as female during ultrasonic testing. All this is resulting in the sharp drop in female population while the crimes and sex abuses on women continued to rise

Speaking on the occasion of International Day of the Girl Child in 2014, The Prime Minister Mr Modi emphasized on eradication of Female foeticide and invited suggestions from the citizens of India on MyGov.in portal.

Selfie with Daughter: Motivating initiative
SelfieWithDaughter was promoted on social media in June 2015, which started when Sunil Jaglan the sarpanch of the village Bibipur in Haryana took a Selfie with his daughter Nandini and posted on Facebook on 9 June 2015 getting world-wide fame.

Benefits and Achievement of the Scheme