With the break of New Year 2023, the 13th edition of MBAUniverse.com Ranking 2023 is out now! This prestigious ranking highlights the changing landscape of management education and offers plenty of insights. So, get ready to find out Which IIM is No 1? How do top IIT B-schools fare and a lot more… Based only on ‘Objective data’, and no subjective assessments, MBAUniverse.com Ranking 2023 reveals India’s Top B-schools. 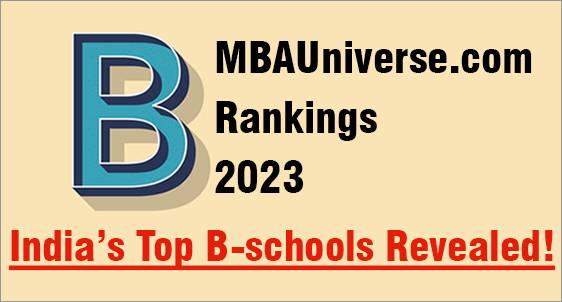 Regarded as one of India’s most credible B-school Rankings, the 13th edition of MBAUniverse.com Ranking 2023 is out now! These prestigious ranking documents, changing landscape of management education in India, offer plenty of insights and some surprises too.

IIM Bangalore continues to hold on to its leadership position as India’s #1 B-school as per MBAUniverse.com Ranking 2023. IIM Bangalore had secured the #1 Rank for the first-time last year in the 2022 survey.

A breaking news from the survey is that SPJIMR Mumbai has dethroned IIM Lucknow to claim the #4 Rank in MBAUniverse.com Rankings 2023. In a strong showing, IIM Kozhikode has retained its #5 rank on this league table. IIT Delhi’s Department of Management Studies is the fastest rising B-school, and almost broke into the top 10 ranking with a strong all-around performance.

But wait…! Before we come to Top 10 and Top 20 B-schools featured in the MBAUniverse.com Rankings 2023, it’s important to note the survey methodology that will explain the ranking results. Since 2010, MBAUniverse.com Ranking has championed the use of only ‘Objective Data’, without any ‘Perception Survey’ data. Designed exclusively for MBA aspirants, this Ranking is based on 360-degree assessment that balances the three pillars of a B-school: Input (student quality & diversity), Processes (faculty, academics, research, and international accreditation) and Outcomes (career outcomes and entrepreneurship initiatives). Check our ranking methodology overview below.

MBAUniverse.com Ranking 2023 - Key Highlights
For those in a hurry, here are the key highlights from this year’s rankings:

All said, the fierce competition in claiming Top Ranks amongst IIMs, PGDM B-schools, University B-schools, and of late IIT DoMs, is promoting innovation and focus on outcomes, which is good news for Indian management education.

MBAUniverse.com Ranking 2023 - Top 10 B-schools in India
Here is the list of the most coveted Top 10 B-schools in India! With top IIMs, and strong pedigree B-schools, Competition is super intense to be in this table. IIM Bangalore is Ranked #1 B-school in India, as per MBAUniverse.com Ranking 2023. IIM Bangalore is leading from the front when it comes to globalization, research and thought-leadership. With 117 faculty members, who are admired subject experts, and career outcomes matching other top IIMs, it has earned its top rank with a total score of 926, out of 1000.

Triple accredited, IIM Calcutta has moved up the rankings to claim #2 rank, while pushing IIM Ahmedabad to #3 rank in MBAUniverse.com Rankings 2023. IIM Calcutta has the highest career outcomes -- with average salary of Rs 34,20,000, highest amongst all B-schools in India!

A breaking news from the survey is that SPJIMR Mumbai has unseated IIM Lucknow to claim #4 position. What is remarkable is its focus on Student Career Outcomes – where it is ahead of all IIMs except ABC. And it has improved its research outcomes in last few years, and also received AACSB accreditation, making it a more holistic B-school.

In a strong showing, IIM Kozhikode has retained its #5 rank on this league table. It has the highest number of faculty – 130 – amongst all B-schools surveyed for this ranking, which ensured strong research outcomes. Despite stiff competition, XLRI and MDI have held on to their Top 10 ranks by successfully differentiating their programs.

So, here are the Top 10 B-schools in India, along with their total scores.

MBAUniverse.com Ranking 2023 - Top 11-20 B-schools in India
IIT Delhi’s Department of Management Studies, ranked at #11, is one of the fastest rising B-schools on our rankings. It almost broke into the top 10 with a strong all-around performance. At #13, Shailesh J. Mehta School of Management at IIT Bombay is not far behind. IIT B-schools are in a sweet spot for several factors: like improving student diversity (partly due to low fees and strong showing in popular NIRF rankings), increasing importance of research, which is their forte, and rising importance of technology in business management.

Joining IIT DoMs on the elite list of Top 20 B-schools in India are a mix of PGDM and Private University B-schools, and also a few IIMs. Top PGDM B-schools like IMT Ghaziabad and IMI New Delhi managed to hold on to their presence in this elite Top 20 list. They are ofcourse facing tough challenge from younger IIMs – IIM Udaipur and IIM Trichy. NMIMS Mumbai has slipped in this ranking (from #10 to #14 this year) and so has IIFT. It seems IIFT’s over diversification (into Calcutta and Kakinada) is hurting its outcomes.

Top 21-35 B-schools in India by MBAUniverse.com Rankings 2023
The next set of the B-schools, ranked No 21-35, are institutions with strong pedigree and consistent performance. Participating in this ranking for the first time, IIT Kanpur’s Department of Industrial & Management Engineering has achieved #24 rank. Top PGDM B-schools including TAPMI, GIM, IRMA, LBSIM, BIMTECH and Welingkar continue to make their presence felt in this cluster. Representing private university B-schools are SIBM Bangalore and IFMR Graduate School of Business at Krea University. They are however going to face stiff challenge from new IIMs like IIM Raipur, IIM Nagpur, IIM Amritsar and IIM Sambalpur who are knocking hard on their doors!

Top 36-50 B-schools in India by MBAUniverse.com Ranking 2023
Given that there are more than 3000 management programs in India, getting into the Top 50 Rank on MBAUniverse.com Rankings is a big achievement by any yardstick. Afterall, top 35-50 B-schools represent the Top 2% of management programs in India. IIM Sambalpur, MDI Murshidabad, IMT Nagpur, SDMIMD and KIIT SOM are ranked right at the top of this table. Here is the full list that completes Top 50 ranked B-schools.

Ranking Methodology: Clusters & Weightage
Based on Factor Analysis, following weightages have been assigned to each of the three clusters.

MBAUniverse.com Rankings 2023: Complete List
Here is the full list of 85 Top B-schools in India, as per our rankings.